When the going gets tough…….Overcoming the fear of failure

One of our biggest challenges in working with a team is keeping people motivated when things get hard.

Why does one person work themselves into the ground doing far more work than is necessary, while another spends hours on anything other than the thing they are supposed to do? Why does one sail along taking it all in their stride while another throws their hands in the air, declares it impossible and has a complete meltdown?

Is it just that some people aren’t very good?

People respond differently to stress and it has nothing to do with intelligence or skill. Very skilled people may still lack confidence in their ability to complete a task.

In situations where people have to deliver something, people are balancing out their desire to do something well (success orientation) with their worries of getting it wrong (fear of failure).

Some people think that a fear of failure and success orientation are opposite ends of a spectrum, with one end indicating high resilience and the other end low. But it isn’t quite that simple. You can have both a high success orientation and a high fear of failure. They are not mutually exclusive. (diagram from De Castella, Byrne & Covington. 2013) 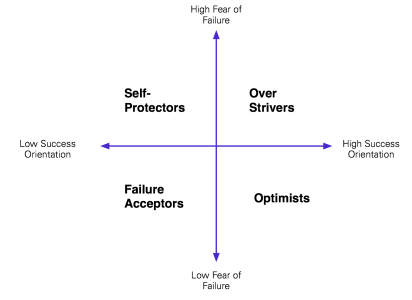 An Overstriver has high success orientation and high fear of failure. They lack confidence so keep working long after value has been achieved. As a result, they are likely to burn themselves out and lack resilience when they hit problems.

Someone with a high success orientation and low fear of failure is an Optimist. They are in the ideal place on this model as they are confident that their effort will produce the result they want. They show resilience and are unlikely to show defensive behaviours.

Self-Protectors have a high fear of failure and a low success orientation. Rather than trying to prevent failure, they find external reasons to justify a lack of performance. For example, other people not having done something, insufficient time or a system they need not being available. Anything. Out the 4 groups of characteristics, people showing these are likely to have the worst outcomes.

Those with low fear of failure and low success orientation are Failure Acceptors. They expect very little of themselves and are seemingly indifferent to both their successes and failures.

Do you recognise yourself, or any of your team here?

How do people try and protect themselves?

The thing is, however unmotivated some appear, everyone likes to look competent and capable to their peers. To keep up this appearance people use two main strategies to protect them from feeling foolish in front of colleagues.

The problem with these strategies on a personal level is that over time they actually reinforce the behaviour people are trying to avoid. Expecting to fail becomes normal so people feel helpless and believe they can’t improve.

Neither do they help the project. Although people look busy the project is still affected by poor quality deliverables and ever extending timelines. Which ultimately leads to dissatisfied customers!

What can you do as a team lead?

One thing is clear, asking people to try harder doesn’t work. It actually makes matters worse as it increases the fear of failure of people who already don’t believe they’re capable of succeeding.

Team members with a high fear of failure benefit from breaking down work into small, manageable chunks. This prevents them feeling overwhelmed and helps them stay on track.

Support team members with a low success orientation by identifying where they have succeeded in the past. When they say they can’t do something, remind them of past achievements. Demonstrating that they are capable of succeeding builds their confidence.

This entry was posted in Behaviour, Psychology and tagged WTHHT. Bookmark the permalink.
Click here to cancel reply.