My interest in change management and behaviour started with my very first IT project. Although the Project manager said the users wanted a new tool, just putting it out there meant it was ignored.

At first, I couldn’t understand this. I thought it was a case of ‘build it and they will come!’. Then I realised there was something a little more subtle going on.

What Projects are about.

Projects are about change. They are the mechanism we use in business to make new things happen.

The project ideal is that someone comes up with an idea to improve the company. For example by making the company more efficient, increasing revenue or cutting costs. A project it set up to implement the idea. When the project finishes, the company is doing things differently and this is better than before.

However, as with all things, once people get involved; real people with feelings and interests and other opinions, then the process doesn’t flow quite as freely as the story implies.

Change is a personal thing. Some people like it some people hate it. Some people believe one approach is good, whereas others believe it is awful. But in business, as in life, everyone to be got to the same end point.

A Model for Change

One way of looking at organisational change is the Kübler-Ross change curve.

In the 1960’s Elizabeth Kübler-Ross developed her stages of grief model after observing the behaviour of people diagnosed with a terminal illness. Initially a model for helping dying patients to cope with death and bereavement, it also provides insight on how people come to terms with any change. This model has been adopted by business as it parallels the emotions that people feel when they experience events like reorganisations at work.

As with all models, it is an approximation of what an individual experiences, not a set of rigid instructions.

Here is a simplified version of the curve describing the common stages that people go through. 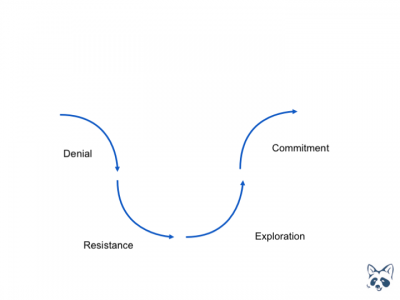 What does it show?

In most situations, people progress through these stages. They may move through them quickly or slowly depending on the magnitude of the change and how much they want it.

Understand that disbelief and resistance are very common reactions and should not be dismissed as someone being unreasonable.

One of the key features of the curve is the dip in the middle of it. That indicates how people can experience a loss in effectiveness while they learn new ways. In an ideal project, people will be more effective after a change than before, but if it fails, or if a person cannot move to the stage where they explore and accept a new approach then efficiency may be permanently lowered.

There are two types of change.

1 One that can be knocked off course.

These are the most common sorts of change usually to do with the introduction of new systems or ways of working.

Understanding that people will have different responses and that it will not all be plain sailing from day 1 will help your change stick.

A change programme will help people get through smoothly and easily, minimising the ‘dip’ in the middle. You can help people by anticipating some of their reasons for resistance and helping them explore options so they can understand what it might mean for them and how they can work with it.

2 One that is inevitable.

These are rarer but can be very significant. An example is a merger with another company.

Understanding that people will have different responses and that it may be both painful and difficult for some people means that the change can go through with the least amount of disruption and difficulty.

A change programme also ensures that people who are negatively impacted are treated with respect.

In both cases, an effective change programme means a business realises the benefits as quickly as possible.

What is your experience?

Do you find change is properly managed where you work, or is there an element of hoping everything will turn out OK?

This entry was posted in Behaviour and tagged WTHHT. Bookmark the permalink.
Click here to cancel reply.